Builders making progress on 11 Under trails 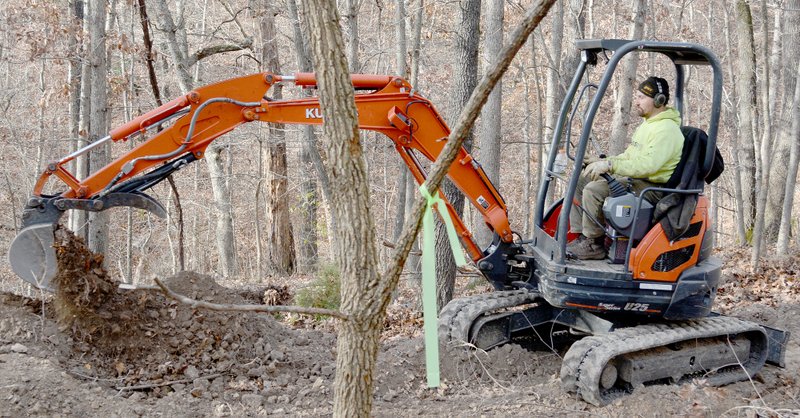 Keith Bryant/The Weekly Vista Team leader Jeremy Witek lays down dirt to shape a berm for a section of trail near Chelsea Road.

Down in the ravines and hollers, crews are hard at work carving out Bella Vista's newest trails.

Workers tend to operate in three or five-person crews, following flagged routes and cutting into the earth to create and shape new paths, which are expected to open mid to late 2019.

Jeremy Witek, a crew leader on a three-man team, said he estimates there are five crews with his firm, Rock Solid Construction, and his crew alone expected to cut 2,200 feet of trail last week.

Construction began Sept., with two firms -- Rock Solid Construction and Rogue Trails -- building the approximately 50-mile network. The project is estimated to take between 12 and 14 months to complete and construction is funded by a $3.9 million grant from the Walton Family Foundation, which also covers the first two years' maintenance.

Erin Rushing, executive director of NWA Trailblazers, said there are currently about 10 miles of trail complete and the weather has been fairly cooperative.

"We really haven't had any weather delays," he said.

The tunnels and bridges for the trail system just wrapped up bidding and stayed within budget, he said, and the city council is expected to look at them during its December meeting. Assuming they're approved, he said, the tunnels should start construction in the first part of next year.

These trails are going to be very different from the Back 40, he said, with gentler grades and wider paths, which he expects will make the 11 Under trails more approachable.

It's important to note that the in-progress trails are still closed. With tunnels, bridges and surfaces not yet finished, he said, there are a lot of drop-offs and other potentially dangerous spots.

"We don't want anyone getting hurt out there," he said.

"They're pulling out washers and dryers ... now it's just absolutely immaculate," he said.

And once these trails open, he said, people can expect to see some great sights out in the hills of Bella Vista -- many of which have been hidden for a long time.

"There are some hidden jewels out there," Nazario said.

Witek said that, before anything gets cut, crews go through to flag the trail. They work closely with NWA Trailblazers and the POA to ensure the trails don't go anywhere they aren't allowed, he said, and they also use instruments to ensure the grade isn't too intense for beginner riders.

After the trail is marked, a crew comes through with tools. In Witek's case, he leads with a backhoe and makes rough cuts and shapes surfaces, while two hand workers follow with rakes and shovels to fine tune and smooth out the shapes before machinery is brought in to compact the freshly-shaped soil.

"We're trying to build a trail that's, like, beginner friendly but will allow more advanced riders to get an adrenaline rush," he said.

Preserving the environment is another concern that shapes these trails, he said. While workers will gladly remove invasive plants, Witek said they do their best to avoid tearing up native plants and make sure the trail goes around trees rather than cutting them down.

Keeping the grade milder helps make life easier for the less athletic but also helps to minimize erosion on the trails.

Witek said he's a believer in Northwest Arkansas' future as a mountain biking community. He's from Wisconsin, he explained, and built trails in 27 countries, but he's already bought a lot and plans to build a home for his family in Bella Vista.

"This is my passion, this is truly what I believe I should be doing with my life," he said.