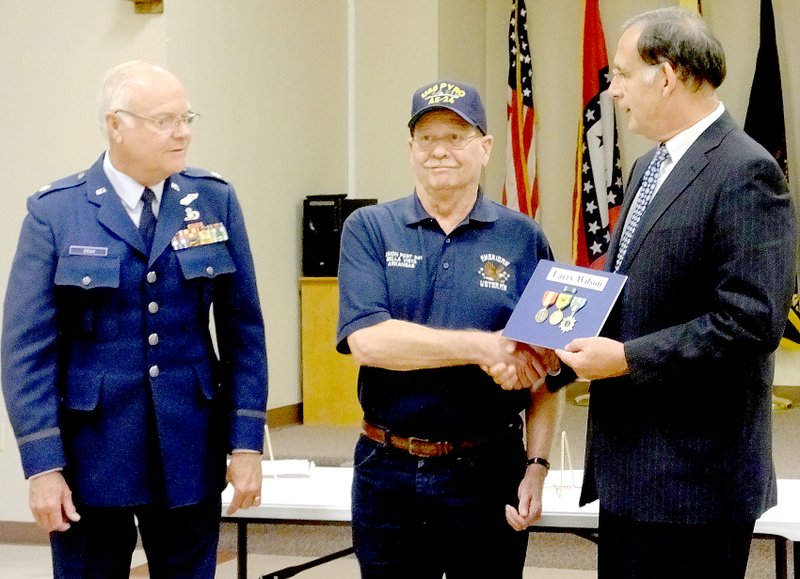 Lynn Atkins/ The Weekly Vista Larry Wilson of Bella Vista accepts his medals from Senator John Boozman at a ceremony at the American Legion Post on Friday while retired Lt. Col. Steven Grey looks on. Wilson, a Navy veteran, served as a maintenance engineer on a munitions ship during the Vietnam War.

Finding the information needed to present a medal to a veteran of World War II or even Vietnam can be a little like an episode of CSI, U.S. Sen. John Boozman, R-Ark., told the small audience gathered at the American Legion Post to watch a medal presentation last week. But his office is happy to help.

"Nothing is more important than this," he said. He described members of the armed forces as ordinary people doing extraordinary things.

Four veterans were honored on Friday afternoon. Larry Wilson of Bella Vista and Albert Harris of Rogers, accepted their medals. Both served in Vietnam as members of the U.S. Navy.

Family members accepted medals for Travis McCullough and James Phillips. Both served in the Air Force -- McCullough during World War II and Phillips during the Vietnam War.

Danny McCullough of Eagle Rock, Mo., plans to display his father's metals in a shadow box, next to the one that contains the medals he earned during the first war in Iraq. He's also a Navy veteran.

Retired U.S. Air Force Lt. Col. Steven Gray provided some background for each recipient. Phillips, he said, served 22 years in the Air Force. McCullough was missing in action for five days and then re-enlisted.

Both Harris and Wilson are Navy veterans. Some people think the Navy is an easier duty than Army or Air Force, he said. But others say, the only difference between being on a ship and being in prison is that you're more likely to be blown up on a ship.

He described the terrible reception Vietnam veterans received when they arrived home.

"How do you square it with them?" he asked. He believes the Vietnam veterans are happy to see the positive reaction that today's veterans receive. They paved the way, he said.

The military is still vital now because of the war on terrorism, Gray said. There is evil in the world that the military will always have to combat.

Parkers Chapel set to face Cotter
by Tony Burns
Seniors at forefront of Bobcats’ success
by Jason Avery
Watson departing Strong for Hamburg
by Jason Avery
Airport fuel sales up, but pipeline cyberattack could affect May receipts, manager says
by Tia Lyons
CADC food distribution scheduled for next week
by Special to the News-Times
ADVERTISEMENT